When you don’t invest, you also loose all compounding interest you would have made from the investment. That doesn’t sound all that bad until you look at the numbers in detail. So, let’s look at this in more detail.

Let’s consider a $1,000 gift, a tax return, or just $1,000 you saved at some point in your life. If that money is blown, you not only don’t have the $1,000 from before, but you’d lose all the compounding interest. Still, that doesn’t seem like it’s enough for Average Joe to show restraint and invest in his retirement. So what right? It’s only a grand.

Twenty year old Average blew his $1,000 on a new couch and a great meal at some high dollar steak house. He’s young, working hard and deserved the best. He deserved to splurge with his new found extra money.

Twenty year old Smoking Joe, on the other hand, heeded advice he had heard that investing early is the surest way to maximize his money. So, he invested his $1,000 in a tax sheltered retirement account in a low cost mutual fund with a 10% return over the last 20 years and forgot about it. He never added any money to his investment.

What is the total impact at retirement? A lot. The compounding interest on investments has a massive effect over 20 and 40 years. So much so that at age 60, Smoking Joe could withdraw over $1,800 every year and theoretically never run out of money by implementing the 4% rule withdrawal model. The 4% rule will be covered in a later post. For now, just trust me that it works.

Now, fast forward just a decade. Average and Smoking were sitting at a park watching their kids play. Average said his old couch is 10 years old and he needs a new one. Average was bragging that he bought a good quality couch 10 years ago and it served him well. He went on to say how he had spent his $1,000 tax return on a brand new couch. Smoking commented that he invested a $1,000 tax return at the same time and it was doing fairly well. Curiosity got the best of Average and he had to ask Smoking how the investment did. Smoking pulled out his phone and showed him a the balance of $2,593.74.

Impressed with this, Average was determined to get in on some of this investing. He decided instead to invest $1,000 he had for the new couch immediately and nurse that couch a little longer until he could save up for a couch. So, that’s what he did.

Jump ahead another 10 years. Now Average and Smokey are sitting next to each other at a kids sporting event. Average was proud that he had followed his friend Smokey’s investing advice. Average was telling Smokey that his $1,000 had grown from that initial investment to $2,593.74 just as Smokey’s had done a decade earlier! Again curious, Average was curious about Smokey’s investment. So, again, Smokey pulled out his phone and showed Average his $1,000 had grown to $6,727.50. 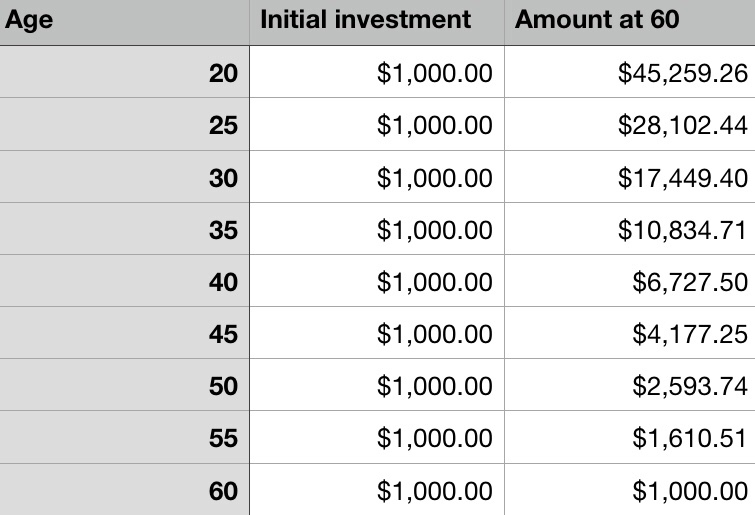 You can check my numbers here.

The above examples shows the power of compounding interest. It’s a very powerful tool that you should take advantage of as soon as possible. The earlier the better in the long run. If you miss the early opportunities, you’ll have to put a lot more of your money away to have the same wealth that you would have if you invested earlier. A late start is still much better than not starting at all. So, don’t delay in getting started.